Transport for London’s decision to reinstate a vital bus route between Hammersmith Bridge and Mortlake has been welcomed by Chair of the Council’s Transport and Air Quality Committee, Cllr Alexander Ehmann.

The decision comes following concerns about the changes to the 209 bus route, raised by local residents at a community meeting about Hammersmith Bridge organised by Richmond Council last month.

It will allow people to get public transport right up to the Bridge at which point they can walk or use an upcoming shuttle service over the bridge and connect with services on the Hammersmith side.

The Council will continue to work with Transport for London to address concerns raised by residents around the loss of the 72-route between Barnes and Roehampton during the day.

We are also engaging with TfL around the frequency of route 485 between Barnes and Wandsworth, as well as it operating later at night.

“We are glad to see Transport for London take on board the concerns raised by our residents at the community meeting held in Barnes, and consequently by ourselves in direct discussions.

“Hopefully, Transport for London will also consider addressing further concerns raised by residents particularly around the loss of a night bus service as well as a service to Roehampton.

“We are very aware of the disruption to everyday life the closure of the Hammersmith Bridge is having and will continue to engage with Hammersmith and Fulham Council and Transport for London to ensure their decision making about the future of the bridge takes this borough’s residents into consideration.”

If you were unable to attend the two community meetings held in Barnes you can watch them online.

Meanwhile, discussions will take place to help alleviate confusion regarding bus stop locations and information for the 533 and 419 bus. 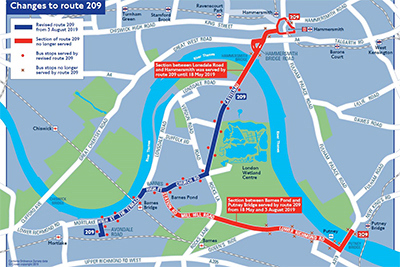