Residents’ needs on both sides of Hammersmith Bridge are the priority

The Leader of Hammersmith & Fulham Council (H&F) took Richmond Council’s Leader on a tour of Hammersmith Bridge today, to show him the refurbishment works being done to return the bridge to full working order and its former Victorian splendour and discuss how they will work together to ensure residents' needs remain the priority.

Hammersmith Bridge belongs to Hammersmith & Fulham Council, but is also a vital part of Transport for London’s (TfL) strategic transport network. For Richmond, the bridge links residents living south of the Thames to central London, via London underground services, and to major roads including the M4 and the North Circular.

In 2015, H&F Council and TfL agreed to restore the Grade II* listed 19th Century bridge to its former splendour and make it fit for modern public transport needs. This year, H&F Council also initiated the most comprehensive review of the bridge’s structural integrity ever seen.

In April 2019 that review’s weekly checks discovered micro-fractures in the cast iron pedestals securing the suspension bridge. The bridge was immediately closed to motor traffic for safety reasons.

A team of 18 world-class, specialist engineers are carrying out a full diagnosis of all the potential problems and their causes. Once that analysis is complete, the works to fully restore the Hammersmith Bridge will begin. The whole process could take up to three years before the works are finished and the bridge is re-opened to cars and buses.

"We know that Hammersmith Bridge has needed significant restoration work for decades. And, in an ideal world, Hammersmith Council would have had a lot more time to plan and work with the community on a scheduled closure. However, the damage was a lot more severe than they once thought. The number one most important thing is that the bridge must be safe to all who use it.

"We will continue working with Hammersmith & Fulham Council and TfL on their plans for the future of the bridge and are committed to making sure that residents on our side are informed and importantly engaged, in any opportunity to help shape it’s future."

"I’d like to thank Cllr Gareth Roberts for his constructive approach and for focussing on the needs of residents.

"People on both sides of the river want to see our beautiful Victorian bridge fully restored and operational for generations to come. That is exactly what is going to happen. But the works are complex as this 19th Century suspension bridge is unique. It’s made of cast iron which is brittle and uses wooden panelling. It was designed for nothing much heavier than horse-drawn carts and carriages but until recently was being used by 20,000 vehicles and 1,800 buses a day. That’s why in 2015, we curtailed the numbers of buses, initiated weekly monitoring and the most comprehensive review of the bridge’s structural integrity ever undertaken - which is how the micro-factures in the cast iron pedestals were discovered.

"We’re pushing to make sure Hammersmith Bridge will be re-opened as quickly as possible. And when it is, people will know that it’s benefitted from the most thorough refurbishment programme in its history which will keep it safe for decades." 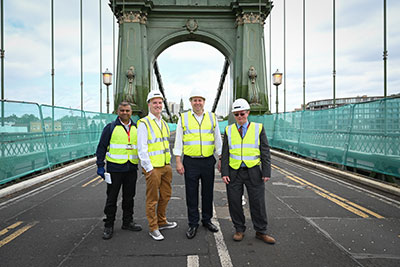