A new campaign against litter and street urination has been launched after figures show that the bill for picking up waste dumped on the street is costing local taxpayers nearly £3m a year.

Over the past few months, the Council has unveiled a raft of new initiatives to try and combat the problem. It currently costs council tax-payers in the borough £2.85m a year to clean up litter.

As part of efforts to reduce this bill, the Council is launching a Fighting Dirty campaign – encouraging local people to join in the fight to keep our borough clean.

"Over the past few months we have seen a huge rise in the amount of litter left in our borough and reports of street urination and dog fouling.

"We will of course go on picking up all the rubbish that’s deposited on our streets and clean up the mess because we take pride in our borough’s appearance. But the cost of this task is enormous – so we all need to come together to Fight Dirty.

"Council Tax payers are having to fund a clean-up operation that costs millions of pounds a year. Families that are already struggling to pay their bills do not need this unnecessary burden. If people make sensible choices about their waste and behaviours then we won’t have to spend such vast sums clearing it up."

The Council has already installed more bins in hot spots around the borough and increased our collections. Other action that has been taken includes working with police to increase their local capacity and operations to target criminality, stepping up the borough’s Park Guard operations (particularly over the weekends), working with local businesses to open their toilets to combat unacceptable problems with defecation and urination, and working with local supermarkets to restrict alcohol sales.

We also enforce against litter and those who soil our streets, parks and open spaces. If caught – you could be fined.

As part of the Fighting Dirty campaign, signage is being installed in key hot spots around the borough, and a new digital campaign launched. You can join the fight by following our top tips online, downloading our campaign materials and displaying them at home, in your business, or on your social media accounts.

Watch the video from Cllr Neden-Watts. 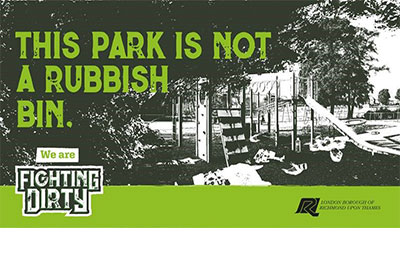