The Government needs to 'sort out' the coronavirus testing programme to ensure that residents can easily access a test, and not have to travel hundreds of miles.

There have been reports across the country, including in Richmond, that the current demand in testing outweighing supply following an increase in numbers of people getting tested for the first time.

Currently Richmond is home to a drive-in testing centre at the RFU (which is closing at the end of September) and a mobile testing centre.

The Leader of Richmond Council has spoken out over the difficulties, he said:

"We know there have been some challenges with regards to people getting a test. If they call then they are on hold for hours, or if they go online, they either can’t get a test, or they are offered tests in absurd locations. I know one resident was offered a test in Aberdeen!

"This whole thing has led to a lot of concern in the community and risks undoing all the hard work that we’ve done to engage local people and encourage them to follow the rules and if they show symptoms, self-isolate and get a test.

"We are working hard to try and find additional testing sites in the borough, but the Government moves so slowly. If we stand any chance of ridding this country of Coronavirus, the Government needs to step up. They promised us a ‘world beating’ testing regime, whereas what we’ve been given would struggle to progress beyond the regional heats."

Whilst the Government has warned that problems with testing capacity might last a few weeks, the Council is reminding residents to only get a test if they are displaying symptoms or they have been advised by a professional or their employer to do so.

"There is concern that people have been going to get tested who haven't got symptoms, it might be because they are anxious, trying to avoid a post-holiday quarantine and they know there are testing centres close by.

"We need to think about everyone here, our neighbours in surrounding boroughs too, the virus doesn't stop at the end of the street.

"People should only book a test if they have Coronavirus symptoms which are - a new, continuous cough, high fever or loss of taste or smell.

"Of course, we don't want to put people off getting a test, I see it as a civic duty, but it is important that we work as a collective to get access to tests. We want Richmond upon Thames to thrive, but we just need to make sure it is done in a safe way."

For more information about coronavirus. 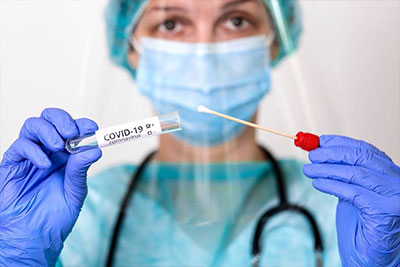