Following the Council’s adoption of a planning framework for the Kneller Hall site in Whitton last year the Ministry of Defence (MoD) is now inviting buyers to put forward bids to purchase the site.

Following the Council’s adoption of a planning framework for the Kneller Hall site in Whitton last year the Ministry of Defence (MoD) is now inviting buyers to put forward bids to purchase the site.

In 2016, the MoD, which owns the site, announced its intention to sell Kneller Hall as part of a wider programme to rationalise the MoD estate. As a result, the Council was successful in securing funding from Government as part of the One Public Estate initiative to create a Supplementary Planning Document (SPD) for the site.

This was adopted by the Council last year having listened to peoples’ views on how the site could be developed. The SPD builds on the Council’s adopted planning policies for the site to ensure that any future development makes a positive contribution to both Whitton and the wider community and respects the important history of the site.

The new owners will be expected to take the SPD into account in the development of their proposals for the site and it will form part of the Council’s considerations when determining any future planning application.

'We have always been clear that Richmond Council would rather not see the Royal Military School of Music leave Kneller Hall. However, it is not in our gift to change the fact that they are leaving. Therefore, it is important to ensure that what happens next with the site results in a positive legacy for both Whitton and the wider borough.

'Kneller Hall has a unique place at the heart of the Whitton community. The Kneller Hall SPD sets out our aspirations for the site, including new community uses, homes and employment and the creation of a public park for the people of Whitton to enjoy. We look forward to proposals that will enhance the mature landscape and offer a viable long-term use for the Grade II listed Hall, reflecting its heritage significance and cultural legacy.'

Catherine Davies, Head of Estates for Defence infrastructure Organisation for the MOD, added:

'Kneller Hall lends itself to a mix of fascinating development opportunities and the Defence Infrastructure Organisation (DIO) is pleased to be marketing this unique site in South West London. The sale is part of an ambitious 25-year plan to release surplus military property and modernise the retained estate.

'The publication of the Kneller Hall Supplementary Planning Guidance last year was down to strong collaboration between DIO and Richmond Council with support from the One Public Estate partnership. I’m delighted that we have agreed guidelines for acceptable future development to support the future use of this historic site and the opportunities this will bring to the Borough of Richmond.'

The Kneller Hall building that we know today was created in the late 1840’s on the site of the country residence of the Court painter, Sir Godfrey Kneller. Kneller Hall itself is Grade II Listed, as are the boundary walls, which means that they are afforded protection. A large part of the site is designated as Metropolitan Open Land, giving it the same status as Green Belt land, which means that this part of the site should be protected from development. In addition, the Council has given legal protection to over 300 trees on the site. 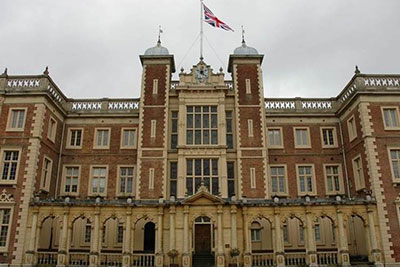 If you are a journalist and would like further information about this press release, contact Elinor Firth on 020 8487 5189.