Work is about to begin to extend the borough’s first protected cycle lane in Kew – all the way to Richmond Circus.

At the Transport and Air Quality Committee on Thursday, Members were told that thanks to £140k from TfL, the popular segregated cycle lane that currently runs from Kew Road to Lion Gate Gardens, will be extended from Lion Gate Gardens towards Richmond Circus.

Since the cycle lanes were first installed last summer, more and more cyclists are using the protected lanes every day. The lanes are a system of raised posts (known as wands and armadillos) that protect cyclists from vehicular traffic on Kew Road.

Works on this next phase are due to start in early March and are expected to take approximately four weeks to complete.

The scheme will be introduced under an experimental traffic management order which will allow residents to give their views on the scheme during the first six months in operation before a decision is made on the next steps.

In addition, the Committee discussed a raft of other initiatives to improve cycling provision in the borough, and make our roads safer. This includes plans to develop proposals for a new strategic cycle route in Strawberry Vale, a new cycle link in Hampton Wick, a Low Traffic Neighbourhood in Ham as well as 50 new cycle racks being installed in Richmond Town Centre and across the borough.

'It is clear that the Kew protected cycle lane is a big success. Data collected from cameras on the road recorded an average of 831 Kew Road cycle lane users per week, which is double the average from 2018 (397 cyclists recorded in a week).

As the weather gets warmer, and hopefully the COVID restrictions start to be lifted, we will see more and more people using their bikes. Being able to travel around the borough safely on two wheels is key.

'It was always our intention to extend the lane towards Richmond, providing a seamless, safe link for people to travel from the Town Centre to Kew Gardens and beyond to the Green.

'I am also pleased that we are able to make investments in other areas – more cycle racks, safer cycle routes and links in other parts of the borough.'

The Phase 2 scheme will be introduced under a new experimental traffic management order, which is separate to Phase 1 and which will allow residents to give their views on the scheme during the first six months in operation, before a decision is made on the next steps. 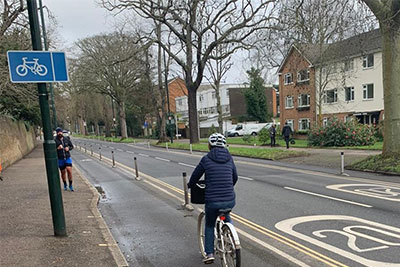