Proposals for Twickenham Riverside get local thumbs up

The Leader of Richmond Council, Cllr Gareth Roberts, has welcomed the overwhelmingly positive response to the recent consultation held on the latest version of the plans for Twickenham Riverside.

"I am delighted that so many people shared their views on the latest proposals and I am incredibly pleased that the results were so positive. These results reinforce what we have been hearing from residents for years; that they want a beautiful, car free park on the banks of the Thames which will act as the destination attraction Twickenham Riverside so richly deserves."

Over the past twelve months, Hopkins Architects and their team, with help from the Council, have been working hard to develop the design for the Twickenham Riverside site. This follows a design competition held in 2019.

The scheme will deliver housing (including affordable homes), office space, shops, a café and pub/restaurant and plenty of open space. This open space includes relocating the Diamond Jubilee Gardens into the centre of the proposed development, with suggestions for event space, an exciting children's play area and pétanque pitches as well as terraced lawns, planting and trees. The proposal also includes public open space along the Embankment with a flexible events space and a widened Water Lane with inviting views from King Street.

Earlier this year, residents were asked their views on the proposals – and 829 people took the opportunity to have their say.

Whilst the results are still being analysed – top line results show that:

"Twickenham deserves so much more than the current site. This is a proposal that looks to the future. Engaging with young people is vital to ensure we create a Twickenham that is fit for future generations. We need to be ambitious and brave and think about the legacy that this site will have.

"Whilst we are still digesting all the feedback – I look forward to working with the Architect to create a final design that even more people can support."

A report with the full results will be published on the Council website in the coming weeks. 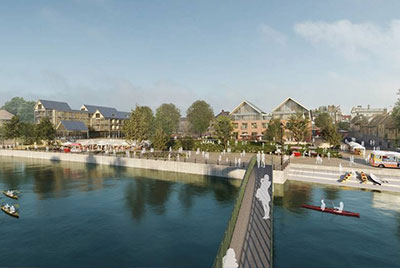