The London Borough of Richmond upon Thames has featured in several television smash hits over the past few years. This filming has raised significant funds for local charitable causes.

Demand from film production companies to film in the borough has grown in recent years and has remained steady throughout the pandemic period with the filming of many new productions already scheduled for 2021.

Following a period of shut down in spring 2020, filming has now resumed in line with Government guidance. The Government has allowed filming to continue throughout the current lockdown under strict industry guidelines. These include regular testing, daily temperature checks, health declarations, working in cohorts/bubbles and social distancing. Productions are required to employ COVID-19 Supervisors to oversee productions on location.

Richmond Council has worked to ensure that this popularity is put to good use by asking production companies who use the borough as a filming location to contribute to charitable causes within the borough. Over the past three years (2018 to 2020) these charitable donations have raised in excess of £85,000 for local charities and organisations.

During this same period the borough of Richmond upon Thames has seen a combined total of 830 days of filming. The borough has been used for numerous films and TV dramas, including Finding Alice (ITV), Bridgerton (Netflix), Ted Lasso (Apple TV+), Unforgotten (ITV) and The Thames: Britain's Great River with Tony Robinson (Channel 5), Gangs of London (Sky Atlantic), The Bodyguard (BBC), Fleabag (BBC Three/Amazon Studios), Unforgotten (ITV), The Great (All4) and Peter Rabbit 2 (Columbia Pictures/Sony Pictures Animation).

'It has been fantastic to see our beautiful borough feature prominently in many hugely successful television and film productions in recent months. Richmond upon Thames has become a hugely popular location for production companies to use due to the borough’s stunning historical architecture and amazing natural spaces.

'The Council is ensuring that this popularity will be used to benefit our residents with productions companies being asked to donate to some of our amazing local charities and community groups. I am delighted to see how much has been raised.' 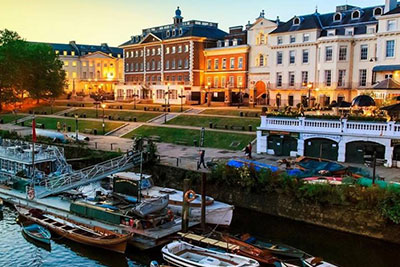 If you are a journalist and would like further information about this press release, contact Jeff Gibbons on 020 8487 5178.