Support the ‘Engines Off. Every Stop’ campaign

Richmond Council is asking residents to support ‘Engines Off. Every Stop’ - the new London-wide anti-idling campaign.

Idling is where drivers leave their vehicle’s engine running unnecessarily, for example when waiting at level crossings or outside schools or businesses.

The ‘Engines off. Every Stop’ campaign gives London’s drivers a clear action to minimise unnecessary pollution and to protect personal and public health. With a basic change in behaviour, drivers can practically engage with air quality issues and make a positive difference. Watch this video to see how drivers can make a difference.

Car idling produces exhaust emissions containing harmful chemicals that contribute to London’s air quality health crisis. Poor air quality can cause asthma, lung disease, heart disease, restricted lung development for children, and costs the NHS and the economy billions every year. It is estimated that up to 4,000 Londoners die prematurely every year due to long-term exposure to air pollution.

Richmond upon Thames is one of 31 local authorities taking part in Idling Action London, the Mayor of London’s Air Quality Fund project which is a volunteer led campaign to tackle engine idling as a source of avoidable air pollution.

In 2020, Richmond Council’s civil enforcement officers engaged with 8,872 idling drivers to raise awareness of the issue and to tell drivers to turn their engines off. This figure includes a four month pause in activity due to COVID-19. Drivers who are approached by officers and who fail to turn off their engines are issued with a Fixed Penalty Notice of £20.

To support an idle-free borough, sign the pledge and commit to turning off your engine when stationary.

“It’s encouraging to see the launch of a new anti-idling campaign to raise awareness of the amount of harmful emissions produced by drivers leaving their engines running for no reason.

“The pandemic has put health - especially health relating to our breathing - at the forefront of our minds. Drivers must play their part in reducing avoidable air pollution that damages our health by remembering ‘Engines Off Every Stop’.

“The idle-free borough pledge has seen 2,218 people commit to turning off their engines – we need more people to do the same so we can continue our commitment to be the cleanest and greenest borough in London.”

Watch this video by students from a local primary school for a further reminder of why not to leave your engine running in Richmond upon Thames. 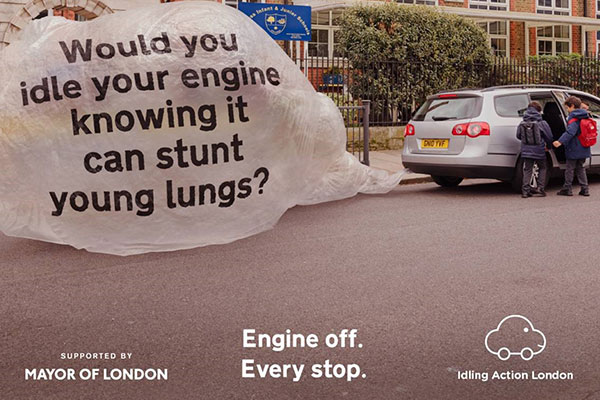