The generous loan of over fifty Old Master paintings has enabled experts to recreate the look and feel of Horace Walpole's historic ‘little gothic castle’ as it was in his lifetime.

Over 50 Old Master paintings on long term loan from Dulwich Picture Gallery - and a further eight works from a private English collection – have just gone on display at Strawberry Hill House, helping to recreate the atmosphere of how the house would have appeared over 250 years ago.

As part of an ambitious project, the remarkable former home of the writer, antiquarian and politician, Horace Walpole (1717–1797) is endeavouring to return some of the 6,000 objects from the collection he amassed during his lifetime and, where possible, recreate the original atmosphere of the house, when the rooms were filled with fantastic works of art.

In 1842, following Walpole’s death, the contents of the House were dispersed in a famous auction, known as the Great Sale. Since then, it has been a long-held desire of the Strawberry Hill Trust to bring as many pieces as possible once in his collection back to the historic villa in Twickenham.

The relationship between Strawberry Hill House and Dulwich Picture Gallery began in 2011 with the long-term loan of the portrait of Dorothy, Viscountess Townshend, c.1718 by Charles Jervas. Dorothy Walpole (1628-1726) was the sister of Sir Robert Walpole, Horace’s father.

Among the paintings from the latest loan is a set of twenty-six British monarchs, assembled by the founder of Dulwich College, Edward Alleyn. These include Henry VIII, c.1618, Queen Anne Boleyn, c.1618 and Queen Mary, c.1618. These royal portraits have been hung in the Holbein Chamber, reflecting Walpole's passion for history and its protagonists, which also influenced the overall arrangement of the artworks throughout the house.

Strawberry Hill House & Garden has been open to visitors for over 250 years. The House is currently closed for Conservation until Sunday 29 January 2023 and will reopen with the new works in situ. The Garden and Garden Café remain open. 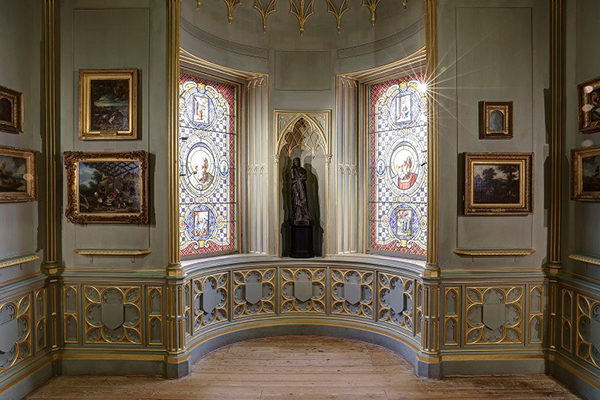