"We are incredibly saddened to hear about the tragic drowning of a young boy in the Thames in Hampton yesterday. Our thoughts are with his parents, family and friends."

"I also want to give my huge thanks to the emergency services who launched a rescue operation yesterday. Unfortunately that has now become a recovery operation and that operation is continuing today.

"The Thames is a dangerous river. It is has a strong current, with houseboats in many areas, as well as moving river traffic, that pose dangers to anyone swimming in the river. It is full of debris including sharp metal, shopping trollies and other items that can cause serious risk to life if hit. There is also a risk of cold water shock, as parts of the Thames remain very cool even in this hot weather.

"For many years, this Council, along with our neighbouring local authorities and partners including the RNLI, Port of London Authority, Environment Agency and Met Police have been warning residents of the dangers of swimming in the Thames.

"Despite these stark warnings of the dangers, swimming in dangerous parts of the river has remained a problem in Richmond upon Thames, particularly at Teddington Lock. Here we have put in place mitigations, including Heras fencing and cactus spikes, to deter people from jumping into the river off the bridge. Despite our efforts, these are being removed and ripped off to allow access to the parapets. Unfortunately, it is usually young people and children who are gathering, jumping and swimming in these areas.

"Richmond upon Thames has over 20 miles of Thames riverbank and 16 bridges. The river is a commercial river - we cannot put up barriers to stop swimming in all areas, and the Council and the emergency services cannot be in all places at all times to disperse gatherings and keep swimmers out of the water.

"Equally, we know that parents cannot have eyes on their children at all times, so education about the dangers of the river is the most important thing. I would urge parents to fully understand the risks and make sure their children know that they are putting their lives in danger every time they jump or swim in the Thames.

The Environment Agency has guidance for staying safe around the River Thames.

"There are many safe ways to enjoy the river, such as through local water sports providers, rowing clubs or boating companies. All have stringent health and safety in place, including trained guides and coaches.

"It is heart-breaking that we have reached the point where a young boy has lost his life and a family have lost their son. If there is one thing to come out of this tragedy, I hope it is that people will finally realise the true dangers of this river and do what they can to make sure this never happens again."

Watch Teddington RNLI on the dangers of jumping into the Thames: 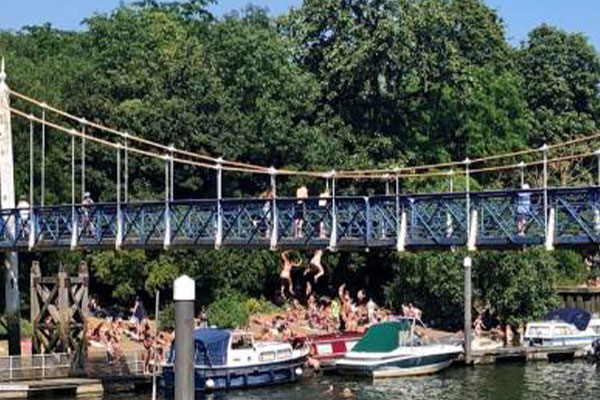