20mph borough-wide scheme hailed a success after one year

Roads in Richmond upon Thames have seen speeds fall, following the roll-out of a borough-wide 20mph speed limit.

Following a public consultation, a 20mph speed limit was completed across the borough in March 2020, excluding TfL red routes, as well as parts of the A305, A308 and A310.

One year on, the Council carried out speed checks across the borough. Overall speed reduction was evident across the majority of sites monitored, confirming that the implementation of the borough-wide 20mph limit has been a success within the borough.

"I am delighted that we have delivered on our promise to reduce the speeds on the borough's roads.

"From the outset we were clear, the purpose of the scheme was to get vehicle speeds down closer to 20mph – a move that is recognised as one that can reduce collisions, injuries and fatalities.

"Crucially, this data vindicates our decision to apply the 20mph limit to the borough's major roads, where we have noted speed reductions of as much as 8mph. Those sorts of reductions are game-changing and, likely, life-saving.

"Whilst we have been pleased by the drop in speeds, we won’t rest on our laurels. There is still more work to be done to make our roads even more safe over the coming year."

The speed surveys were collected over a period of seven consecutive days last year, and despite less road traffic due to the pandemic, which has resulted in an increase in speeds elsewhere in the country, local drivers were driving closer to the 20mph limit locally. It is therefore likely that when speeds return to normal levels, further reductions in speeds can be expected.

As part of the surveys, traffic speeds on a small number of roads were considered still too high, and therefore, further assessments will now be undertaken to consider what additional intervention measures; for example, signage or additional physical measures, could be undertaken to bring down speeds even further in these locations.

See the review of the borough-wide 20mph speed limit 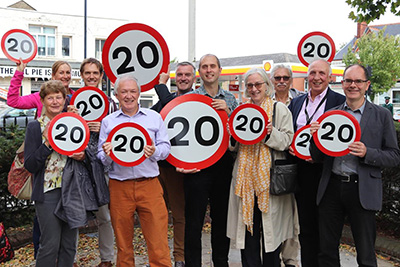