Following reports that an unauthorised group of travellers arrived on Kew Green last night (Thursday 27 May 2021), the Council will commence the legal process that will require them to leave.

As soon as the Council were notified that travellers had arrived, officers visited to carry out a site assessment and request that they move on.

Unfortunately, the group of around 12 caravans and associated vehicles were not willing to leave or co-operate with a welfare assessment, and therefore the Council will now commence the legal process to obtain and enforce a Possession Order.

It is expected that the process will take a number of days. This is necessary due to a High Court order earlier this month that denied the Council’s request to extend the previous expedited injunction process, in common with numerous other local authorities. Therefore, the Council now has to go via the courts.

The Council, along with Park Guard and the Police, will continue to liaise with the group and monitor the site. We will update residents in the area throughout the process.

When the travellers do leave, the Council will repair any damage and remove any waste left on the Green.

"A small group of travellers has arrived in Kew. This morning, Council officers will commence the legal action required to expedite their departure. Due to a recent court ruling, this process will not be as fast as residents would like and I know that they will be concerned, but we have to work within the law.

"As soon as the travellers leave, we will inspect the area and ensure that any damage is repaired, and waste removed. Our Park Guard officers, along with the Police, will be monitoring the site closely until the group depart." 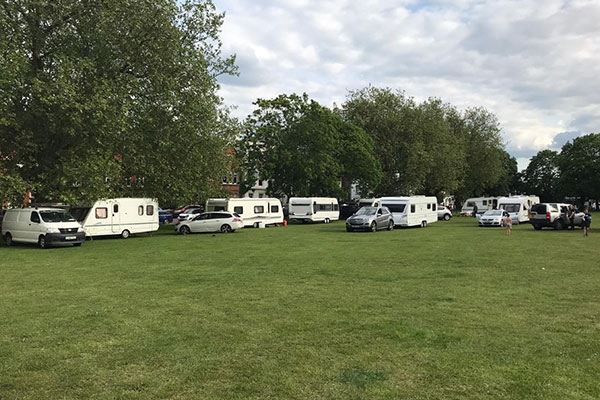