The Council has been and will continue to negotiate with the local Trust, who have the lease of Diamond Jubilee Gardens, to gain voluntary possession of their land. Despite ‘In Principle Heads of Terms’ being agreed with the then Chair of the Trust in early 2020, the Council was forced to initiate the CPO process in October 2021 having received no further agreement from them.

The Council made it very clear that it wished to negotiate with the Trust and would continue to have open dialogue in the hope of securing the voluntary surrender of the lease, in exchange for a new lease for the new and improved gardens space.

However, despite agreeing to being part of the project, and being integral to the design process for the outside space, the Trust have subsequently announced on their website that they are strongly objecting to the CPO process.

“It must be remembered that the land is leased to the Trustees and made available to the people of the borough, and the people of the borough have been quite clear that they want to see a whole site solution delivered for Twickenham Riverside, rather than a piecemeal approach. This therefore must include Diamond Jubilee Gardens – which originally the Trust agreed to.

“We have always been committed to working in partnership with the Trust to ensure that we are on the same page. And so far, we have been. The Council has gone above and beyond to accommodate the Trust, while still retaining the integrity of the Hopkins design we all love so much.

“We have come so far with the plans for this site. But we can’t be left with uncertainty over the Gardens’ inclusion. Our commitment to redeveloping the Riverside and making it a place for everyone will not be deterred.

“Whilst it is incredibly disappointing that the Trust made their announcement that they would not be supporting the scheme on their website, rather than proactively engaging with us, our generous offer is still on the table. I hope that they will change their minds and continue to work with us in the future. Regrettably due to the Trust’s position and the uncertainty that means in terms of delivering the scheme, we have to progress the CPO process in parallel to seeking to reach a negotiated agreement.”

The Twickenham Riverside Trust agreed prior to the design competition held in 2019 that the Diamond Jubilee Gardens should be included within the site plan for the redevelopment of Twickenham Riverside, and that this was an opportunity to deliver a bigger and better public open space for residents. The Gardens were then included as part of the site for the competition which saw Hopkins Architects announced as winners. During the competition process the Council received a letter of support for the Hopkins scheme from the Trust, as well as several other stakeholder groups.

From the start of the design competition the Council has committed to delivering a larger and improved public open space within the site which would be allocated as the ‘new’ Diamond Jubilee Gardens and would deliver more benefits for residents than the current gardens whilst meeting the objects of the Twickenham Riverside Trust.

The Hopkins’ design includes a larger overall amount of open space for the Trust in the centre of the scheme, greater accessibility of the gardens, incredible views over the river, with space to hold events both on the grass and on the Embankment, a larger and more exciting children’s play area, pétanque pitches and many more exciting ideas currently being worked through.

The Council’s own negotiated offer to the Trust which was agreed in principle in January 2021 with the then Chair of the Trust, included a grant (for four years), approval to keep any revenue generated from events held in the gardens, the Council to pay for the maintenance of the space in perpetuity, a new 125-year lease and the ability for the Trust to utilise the new car-free Embankment as an additional event space. The Trust have also been engaged with throughout the design development process, including inputting into the design of the open space through regular design meetings.  This agreement, and the generous terms within it, is only possible through the Trust following the negotiated route for the surrender of the lease as the CPO process has different requirements for the Council to meet.

The Trust has recently appointed a new Chair, who the Council hopes will uphold the principles agreed and will allow the Council to continue to consult and negotiate with the Trust in anticipation that they will agree to the new space for the benefit of Twickenham residents. But despite the negotiated offer to the Trust being confirmed via Committee in June 2021, the Trust’s lack of decision and refusal to agree the very generous terms under which they would surrender their lease to allow construction to take place before being granted a lease of the new open space, has forced the Council to follow the parallel Compulsory Purchase process to gain possession of the land and deliver the significant benefits of a whole site solution to the Riverside.

In 2015 the Council purchased properties on King Street and Water Lane, with the intention of demolishing run-down, dated buildings, an underused car park and old pool house, to create a stunning community space and fulfil the vision of linking the town centre to the river and Diamond Jubilee Gardens, in accordance with the site allocation in planning policy.

As no resolution has been agreed despite months of negotiation, the Council has been left with no choice but to move forward with compulsory purchase of the lease to the Gardens. Following construction, the new Diamond Jubilee Gardens would be available to the public as open space for all residents to enjoy. 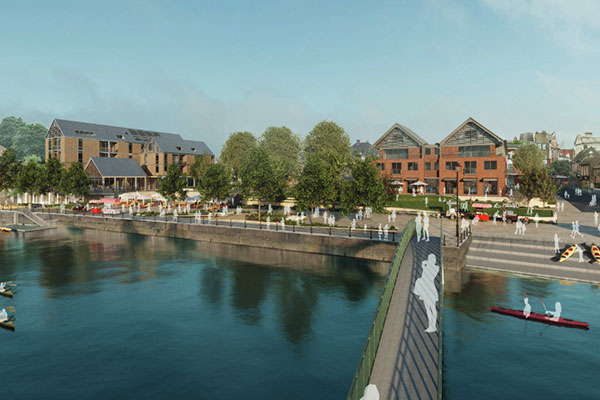