The Mayor of Richmond upon Thames has expressed her condolences, on behalf of the Council and residents of the borough, following the sad news of the death of our late Sovereign, Queen Elizabeth the Second.

In a letter of condolence to the Palace, the Mayor, Councillor Julia Cambridge, has said:

“The Queen has been a constant and reassuring figure in the lives of the British people. Through decades of rule from her accession to the throne in 1952 and throughout her seventy-year rule, the Queen’s lasting presence and commitment to the nation and its people, has provided reassurance for so many.

"Queen Elizabeth’s devotion to her family and this country has been a true inspiration. Her work as the longest reigning monarch has had a huge impact on the lives of so many. Queen Elizabeth will be remembered for her service, devotion, and dedication to the people of the United Kingdom and the Commonwealth.”

“This is an incredibly sad time for our nation and we know people will want to pay their respects and share their memories of Queen Elizabeth. Buckingham Palace has published information about their options for commemoration, but we know that not everyone will be able to travel to central locations. We are therefore offering a location for flowers to be laid at York House in Twickenham and Books of Condolences in a number of locations around the Richmond upon Thames.

“This is a time for us to come together as a borough and remember the life and work of an extraordinary woman. Buckingham Palace have issued guidance for the period of mourning, between now and the funeral. If you are looking for guidance on how you can ensure you respect the wishes of the Royal Family during this period, I would encourage you to seek that information out.”

Buckingham Palace have opened a virtual Book of Condolences.

While the Council encourages residents to sign the online book, physical books are available at the York House reception and Civic Centre reception in Twickenham and at each of the libraries in the borough.

If support is needed to write a message in the physical book, Council officers are available to help. For residents who are unable to sign the online book or visit one of these locations, messages may be sent by post and the Council will add these to one of the physical books. Please send written messages to Book of Condolence, c/o The Mayor’s Office, York House, Richmond Road, TW1 3AA.

Once the books are closed, the books will be archived at the Richmond Reference Library.

Public floral tributes are welcome at the York House main driveway, in Twickenham. Tributes will be kept for up to two weeks following the funeral of the Queen (although any withered or dead flowers will be removed on a regular basis). We ask members of the public to leave flowers only. All endeavours will be made to compost the flowers, so we ask that people please remove any cellophane or other wrapping/packaging before laying. Any cards left alongside floral tributes will be collected and added to the borough’s physical Book of Condolence. Any other forms of tribute that are left (e.g. teddy bears), will be considered for archiving or will be recycled.

At 10am on Saturday 10 September 2022, St. James’ Palace will make the Proclamation, which is the formal announcement of the new monarch.

The Proclamation will be made locally by the Mayor of Richmond upon Thames at a short formal ceremony at 2.30pm on Sunday 11 September on the steps of York House in Twickenham.

Any further details of local events will be published on the Council website as and when details are confirmed.

In accordance with protocols, the Union Flags that fly above York House and the Civic Centre have been lowered to half-mast. 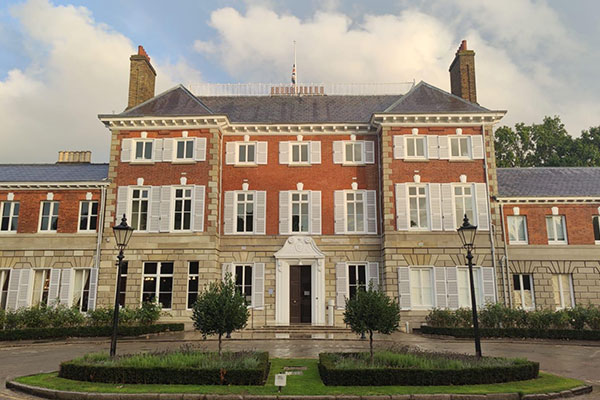