The proclamation was read by the Mayor of Richmond upon Thames at a formal ceremony on Sunday 11 September on the steps of York House in Twickenham.

The Mayor of Richmond upon Thames, Cllr Julia Cambridge, was joined by the Leader of the Council, Cllr Gareth Roberts, a number of local dignitaries and a sizable crowd of onlookers to mark the proclamation of the accession of His Majesty King Charles III at York House.

The local ceremony took place on Sunday afternoon following the formal announcement of the new monarch at St. James’ Palace the previous day.

View the full gallery of images from the ceremony.

In accordance with protocols, the Union Flags that fly above York House and the Civic Centre are continuing to be flown at half-mast.

Buckingham Palace has opened a virtual Book of Condolences.

While the Council encourages residents to sign the online book, physical books are available at the York House reception and Civic Centre reception in Twickenham and at each of the libraries in the borough. 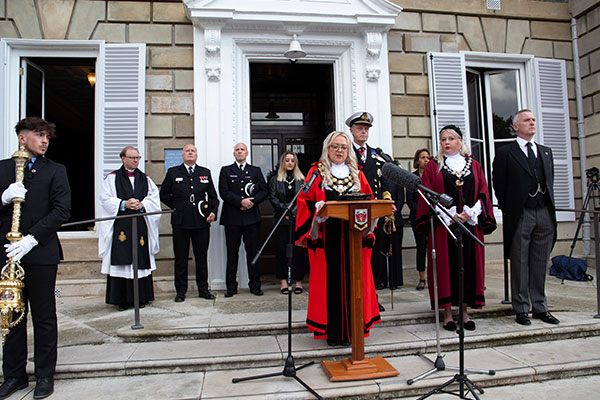