Even if we're not able to physically come together to celebrate 75 years of VE Day, Richmond upon Thames will still be marking the occasion on Friday 8 May to remember the lives lost and the enormous sacrifices that were made.

Here are just some of the ways you can get involved to mark the occasion.

Residents are encouraged to create Great British Bunting to display in windows at home. Hang your bunting with pride over the weekend Friday 8 May to Sunday 10 May 2020, and share your pictures on social media using the hashtags #GreatBritishBunting and #RichmondVEDay. More information on Great British Bunting.

Take time to look into some of the creative ways those who lived through the war fed their families when food was rationed. Why not attempt to re-create a recipe - we'd love to see the results! Share them on our social media accounts using #RichmondGetsCreative. 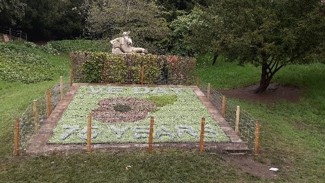 A special display of flowers has been planted in Terrace Gardens in Richmond to commemorate the 75th anniversary of the end of war in Europe. The special bedding includes coloured plants have been planted to mark out the shape 'VE Day, 75 Years', along with a red poppy.

Join the Minute’s Silence (11am)

At 11am on Friday 8 May, BBC One will lead a poignant two-minute silence. This national moment of remembrance will pay tribute to heroes of the past and present.

We are also encouraging residents to take part in the ‘Nation’s Toast to the Heroes of WW2’ at 3pm on Friday 8 May, from the safety of their own home by standing up, raising a glass and undertaking the following ‘Toast’ – “To those who gave so much, we thank you.” Watch our social media accounts to see our Councillors leading the way.

On Friday 8 May 2020 you can also be part of the following events from your home: