Key information on businesses in the Borough. 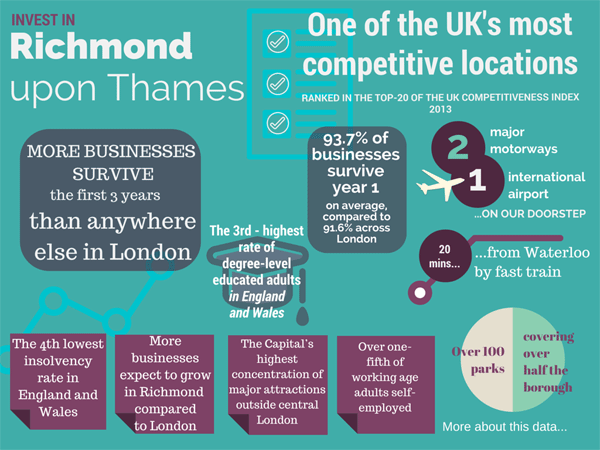 On average, 65% of businesses survive three years, compared to 58% in London and 62% in GB (data from the Office of National Statistics, covering survival of businesses that started between 2002 and 2010).

93.7% of businesses survive year one on average, compared to 91.6% in London and 92.6% in GB (data from the Office of National Statistics, covering survival of businesses that started between 2002 and 2012).

More businesses plan to grow than in London generally

66% of businesses expect to grow their business in the next two years (LBRuT Business Survey 2015), compared to 63% in London (2014 London Business Survey)

Third highest level of degree-educated adults in England and Wales

56.7% of residents educated to degree level or above, as evidenced by the 2011 census. This rises to 66.8% in the ONS Annual Population Survey (which samples households) compared to 49.1% in London and 36% in GB.

The Capital’s highest concentration of major attractions outside central London

This brings an estimated £469 million annual income to the borough (GLA Local Area Tourism Impact Model, 2009).  It is likely that this figure has grown since this data was published. We estimate that the visitor economy also brings 4.5 million visitors per year, and this supports 12% of the borough’s jobs (Local Economic Assessment, London Borough of Richmond upon Thames, 2010)

Parks and open spaces cover over half the Borough’s area and we also benefit from 21 miles of river frontage.

The M3 joins the A316 in the north of Richmond upon Thames, 5 minutes’ drive from its junction with the M25.

Frequent fast trains from Richmond or Twickenham stations reach Waterloo Station in around 20 minutes. These are supplemented by stopping services, which includes direct links to Kingston and Hounslow.

Up to: Invest in Richmond

Stay up to date! Make sure you subscribe to our business support email updates.