Richard died on 20 October 1890 in Trieste and Isabel’s first act was to go through his papers and burn what she thought unfit for publication, exactly what was included is still not clear. Four days after Richard’s death a funeral was held, Trieste gave him a full military funeral “such as is only accorded to Royalty.” All the flags in the city were lowered to half-mast and it was said that most of the 150,000 inhabitants turned out to watch as his coffin “covered in the Union Jack” was escorted by the Consular Corps in full dress uniform to St, Mary’s Church. After the service, the coffin was placed in a consecrated room at the small burial ground behind the church to await shipment home to England.

Isabel now had the task of packing up all their belongings for the journey home, all the rooms were crammed with furniture and items collected on their travels. It is estimated that there were about 8,000 books in the house. She then left for London on January 27; her luggage consisted of 25 packing cases, but left 125 cases behind in Trieste as she could not afford to ship them back. Richard’s body was shipped home and was met at Liverpool by Isabel. A train brought the coffin to Euston Station and then a hearse took Richard on his last journey to Mortlake. His body was laid in the crypt under the altar in St. Mary Magdalene’s church as the marble and stone tent would not be ready until May.

In fact, it was not ready till June and the funeral service was held at Mortlake on Monday 15 June. About 650 announcements were sent out “It will take place on the 15 June at St. Mary Magdalene’s Church, Mortlake at eleven o’clock. Train [from London] leaves Waterloo at 10.00 a.m. and reaches Mortlake at 10.47. The station is a few yards from the church.” About 400 people attended the funeral and The Thames Valley Times reported the event in its edition of 17 June and described the mausoleum thus: 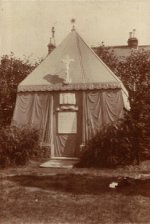 “It is a reproduction in stone of the semblance of an Arab tent…It stands on a bed of concrete, and above that a square of rough-hewn York-stone some 12ft. by 11ft. The “tent” itself, sloping inwards a few degrees on all sides, is composed of Forest of Dean stone. Throughout, the slabs are carved to represent the natural irregularities of surface of a tent, and the joinings are made neatly at the places where ropes are represented as binding the whole to the ground. The design would not allow tent-pegs being introduced, but otherwise the appearance of a tent is well maintained. The door, also a solid slab of stone, is carved to represent a drop-curtain, and moves on flanges of gun-metal. From the top of the elevation other slabs of stone form a roof which meets at an apex above which is a gilt ‘Star of Bethlehem’. Below, but at the top of the front elevation, is a well-executed crucifix, in white marble with ‘I.N.R.I.’ at the head, and the crown of thorns at the foot. From the foot of the cross extend on each of the sides  a row of gilt crescents. As originally designed the crescents would have been above cross and below the star, but the Catholic hierarchy placed a veto upon a Christian emblem occupying a sub-ordinate relation to the most important of the Moslem insignia. It must be added also that from the standpoint of artistic effort the crescents look striking here as they could be made to do elsewhere. On the upper part of the stone door is a carved marble ‘Book of Life’ giving Burton’s details. The mausoleum is lighted from the back by a small, wire-protected, stained glass window, with the single figure of a dove descending with outspread wings. Within, the Oriental style of the fabric is maintained by a number of beautiful lamps, brought over by Lady Burton from Trieste, suspended from  the ceiling and shed a ‘dim religious light’ through jewel-shaped facets of coloured glass each no bigger than the Koh-i-Noor diamond. Two Eastern lamps were also on the marble altar at the end, opposite the entrance door, the pillars being finely-moulded bronze serpents. and the shape, together with the suspended lamps. That of one side of a pair of small beam scales. Huge candles of graduated heights, in massive silver sticks, were also here for the occasion. On a three-cornered marble shelf at the right-had side was a curiously wrought vessel, with iron frame, to contain the holy water. The floor is of white Carrara marble, beautifully veined, and on each side are marble ‘bearers’ about 6 inches high, for the coffins of  Sir Richard and eventually of Lady Burton…The mausoleum itself…has cost £460, but  the incidental and other expenses will no doubt run to double that sum.”

Isabel made regular visits to Richard’s grave from her home in Baker Street and on one of these visits she noticed that a small cottage close to the churchyard was available for rent. She justified the rental by saving the fare travelling to and fro from London and that it would be more pleasant in Mortlake than central London in the summer. She had a name-plate made for "Our Cottage" and planted roses, ivy and honeysuckle round the front door. She now needed morphine injections to help her cope with the pain of the cancer, but she was determined to republish 34 of Richard’s works in a Memorial Edition. In only 8 months she finished the 2-volume biography of Richard, The Life of Captain Sir Richard Francis Burton, which was published on 11 July 1893.

The book was a great success and Isabel wrote “With my earnings I am embellishing his mausoleum, and am putting up in honour of his poem Kasidah, festoons of camel bells from the desert, in the roof of the tent where he lies, so that when I open or shut the door…the tinkling of the camel bells will sound just as it does in the desert. On 22 January [1894] I am going to pass the day in it as it is my thirty-third wedding day and the bells will ring for the first time.”

By 1895, Isabel was having difficulty in walking and, in the summer, a bout of influenza and a bad attack of abdominal pain meant that she was unable to progress very far on her own autobiography. So she contacted W.H. Wilkins and asked him to help her when she was able to return to the project. She moved down to Eastbourne in September of that year where she stayed until the following March when she returned to London. She died on 22 March and was buried by her husband’s side at Mortlake. Wilkins’s book, The Romance of Isabel Burton, was published in 1897.

By 1973 the tomb was in a terrible state of repair. Vandals had broken in and the door had been damaged, so the entrance had been bricked up and plastered. The stained-glass window at the back had been smashed and therefore boarded up. The tomb was surrounded with weeds and overgrown trees. The outside was covered with lichen and the gilt had been lost from the Star of Bethlehem and the Muslim crescents. A fund was started to repair the tomb and £2,000 was raised from various sources. On 17 June 1975 a ceremony was held to mark the end of the restoration work.

Up to: Sir Richard and Lady Isabel Burton